Lessons From a Trip to France 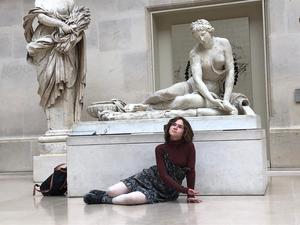 Traveling never used to interest me very much. Of course I wanted to see other cultures and places, but traveling never was on the top of any list for me. Until now.
by Chloe Kiparsky
Traveling never used to interest me very much. Of course I wanted to see other cultures and places, but traveling never was on the top of any list for me. Until now.
Recently, I participated in the OHS French Club’s trip to Paris, and it’s safe to say it changed my life. I never expected how much impact going somewhere completely different from where I’ve lived before would have. I grew in the realms of language, mindset, and connection, among many.
One morning in Paris, I went to the market. We were going to cook dinner that evening as a group, but we needed ingredients. We had visited this market earlier in the trip, but this morning it felt different, possibly because it was earlier in the morning and very busy. It was one of the purest French things I experienced the whole trip.
I was with chaperones, but as the student of French, I got to order all of our food (in French) and talk with all the people (in French), and it was extremely empowering. Speaking in French with the vendors at the market felt like a glimpse of a possible future for me, and gave me a sense of what my potential could be if I dedicated myself to learning French fully.
Another growth experience I had in France was becoming more independent. Some afternoons on the trip, we were allowed to go off in groups of two and explore Paris by ourselves. This introduced me to a greater sense of responsibility for myself and a greater awareness of the people and things around me.
I have lived in Ouray (an extremely non-threatening environment) for the crucial period of time when most teenagers start getting more independent and going places by themselves or with only friends. I do that here, but it is very low risk. Spending time alone in France definitely gave me a taste of what it’s like to be a teenager growing up and experiencing milestones in a larger city.
In Paris, there are a lot of pickpockets, so we had to be wary of our stuff at all times. We had to check our bags frequently and make sure we had everything important in a secure place that only we could get to easily. This gave me, and everyone else on the trip, a hyper awareness of our bodies and bags at all times. This lesson returned to Ouray with me, for better or for worse, and my stomach still leaps when my backpack shifts on the walk to school.
Before the pandemic, Ouray school did an exchange program with a school in Normandy, and some of the students that had come to visit in 2019 met up with us in Paris. One girl who visited, named Emilya, was about my age. I wanted to talk to her, but it was very awkward at first because it was hard for her to understand my French and she didn’t speak English very well.
We Americans often give up trying to communicate with someone if they don’t speak English off the bat. But I wanted to talk to her, so I pushed through and we ended up having a nice conversation while walking along the Seine, each speaking the other’s language for practice. It was a fascinating experience to push through language and culture barriers and have a genuine connection.
I also gained or strengthened my connection with everyone else on the trip with me. I went into the trip friends with everyone going, and came out feeling like they were my family. Living with people, traveling with people, and having new experiences with people makes an already tight knit group gain even stronger bonds.
The French trip changed my life and my perception of everything in it. The things I saw, people I met, and events I experienced were truly impactful and I am already thinking about my next trip abroad.